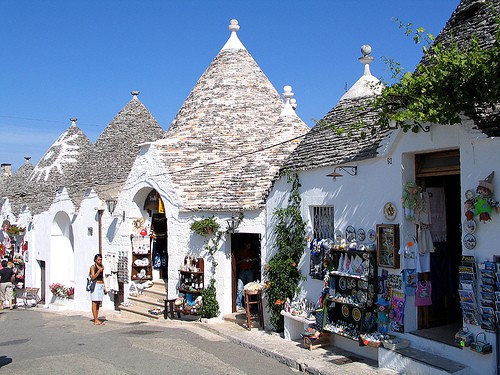 Puglia or Apulia, is the southernmost eastern region of Italy. In fact it is considered the “heel of the boot”. Its coastline, the Adriatic in the east, the Ionian south and west, is one of the most beautiful in all of Italy, with silvery olive orchards stretching all the way to the long sandy beaches touched by the one of the clearest and cleanest seas in the Mediterranean. It is an ancient land, and one which was invaded many times in its history. One can still see towers built to ward off invaders centuries ago.

One of the results is that even the dialects spoken in Puglia are unique, as they are almost languages in themselves,  difficult to understand, even by people from nearby regions.  Nowadays, it is divided into 6 provinces: Bari, Brindisi, Lecce, Foggia, BAT (Barletta, Andria and Trani) and Taranto, the most important being Bari, the region’s capital, Taranto, for it is home to the largest port  in southern Italy, Brindisi, which is the sea-gate to Greece, Turkey and the Orient.

It is the region of the Gargano promontory, with its beautiful protected “Foresta Umbra” where one can drive or hike for hours delighting the senses with rare plants, trees, game and birds. Ladies, there are over 50  types of orchids that grow in the wild here as nowhere else in Europe.

It is the land of “Padre Pio”, and the Sanctuary built by his devout is visited by millions. It is the Silento Peninsula, so beautiful and varied, that it attracts sun lovers and scuba divers in the entire summer.

It is the Trulli di Alberobello, very unique homes made entirely from local stone, with conical roofs. Many of the larger complexes have now been restored and made into quite luxurious hotels.

It is the “Masserie”, the farm houses of old times, so beautiful and so cool in the summer that you don’t need air conditioning. Health farm lovers... no need to look anywhere else, several Masserie are now Well Being Centers that cater to men and women that like to be spoiled   by professionals, in an ambiance which is unlike any others.

Although Puglia by nature is and arid territory, the agricultural production is one of the most remarkable in Italy. Traditional vegetables, such as peppers, eggplants, artichokes, chicory, cauliflower,  and more exclusive produce such as the very pugliese cime di rapa, rucola and fava beans. One must not forget to mention   the Lampasciuoli,  onion like bulbs, whose bitterness gives the delicious  Apulian dishes their uniqueness.

Due to the dryness of the soil Puglia is a natural stage for production of olive oil, table grape, wine and   wheat. Since olive trees are nearly everywhere in Puglia,  it's no surprise that fifty percent  of Italian olive oil is produced right there.

And with all this variety, just imagine its cuisine: The  typical pasta dishes of the region are maccheroni, cavatelli, spaghetti and the excellent “orecchiette”, considered the queen of the pugliese pasta, and with all those delicious vegetables, the choice of sauces is infinite.

Puglia is also famous for its bread and focacce, and for the “taralli” and “friselle”, flavored with the local herbs and spices.

Puglia was always a prolific producer of wine and has often been referred to as the “wine cellar of Italy”. Until a few decades ago this very stout and strong wine was exported to the northern regions and to France to be used as “cutting” wine. It is only in recent years that particular attention was given to the creation of more palatable, lighter wines that could compete with those of other regions. The results are spectacular, and wines such as Primitivo, Salice Salentino, Lizzano Negroamaro,  are now appreciated by the best sommeliers.

The area called “murgia” is famous for its cheeses, like “burrata”, so creamy that it melts in your mouth just  like whipped butter, and “Caciocavallo Canestrato Pugliese”.

We left the biggest treasure for last, like our grannies leave the best for last so you can savour it for hours: the sea food - being Puglia a peninsula, it is rich in all varieties of fish, from blue fish typical of the Adriatic, to the more delicate “orate” and “branzini” of the Ionian; from tasty oysters that can compete with those of the Northern European seas, to mussels and squid and Polpi Arricciati (octopus) so small and tender… it’s no wonder when one thinks of the most delicious dish in Puglia, it has to be the combination of all these in the “crudo di mare” – eaten raw, sprinkled with extra virgin olive oil, lemon and pepper and accompanied by a great big slice of the perfectly baked bread, preferably from Altamura,  topped with a drop of the local Extra Virgin Olive Oil.